What's next as he builds his TheGRIO and HBCUGO SPORTS NETWORKS? Read on to find out!

To get a sense of how quickly Byron Allen can expect his team to move at Allen Media Group, consider what happened in late July. Top executives there learned that the company’s deal to acquire the Black News Channel was going through a week before its close.

Allen, who is the Founder, Chairman and CEO of AMG, directed his staff to perform at top speed. “We had five days to literally determine our initial programming strategy and schedule; discuss Byron’s vision with all the MVPDs; and plan a comprehensive technical execution to launch on August 1st,” recalled Janice Arouh, the company’s President of Network Distribution. “For most companies, it would take a year to do the strategic planning of a rebrand.”

Black News Channel—a linear cable channel that had gone into bankruptcy—was rebranded to AMG’s theGrio. The name, theGrio, comes from the word griot, a storyteller who maintains a tradition of oral history in parts of West Africa and who delivers the news from the city center to the countryside. The digital website version of theGrio is a top digital news and entertainment source. In its newly enhanced form, theGrio is positioned as the “Voice for Black America” and includes entertainment, lifestyle, movies, sports, and news. Also, the brand includes a unique FAST channel extension available on streaming platforms. 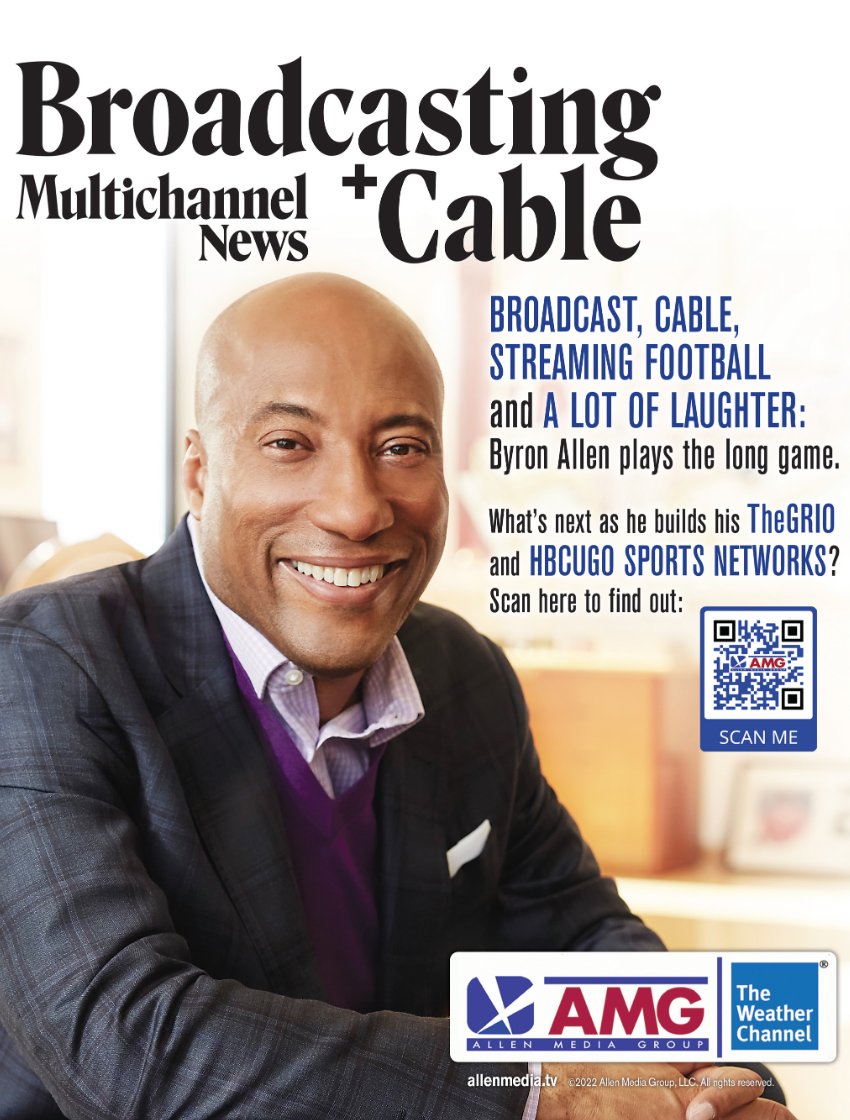 That’s just one example of the dramatic changes that have happened at AMG, and what’s likely to occur moving forward. “I’ve always said, this will be the world’s biggest media company, because we’re better positioned than anybody,” Allen said in a recent interview with Jack Myers, Media Ecologist and Founder of MediaVillage.com.

If that sounds like bravado, consider what’s happened in the last year alone. In addition to the Black News Channel acquisition, the company inked a two-pronged partnership with Google in January putting AMG’s intellectual property in Google’s cloud storage, leveraging its technology to bolster digital expansion, and giving a collection of the company’s channels greatly expanded distribution via the virtual MVPD YouTube TV.

YouTube TV has launched AMG’s networks The Weather Channel, the court network JusticeCentral.TV, Comedy.TV, and Recipe.TV, And the remaining networks in AMG’s portfolio will be included in YouTube’s digital tiers later on.

Distribution accelerated even further in May with a new Cox Communications carriage agreement for JusticeCentral.TV, Recipe.TV, and Comedy.TV. That same month, AMG launched The Weather Channel en Español – four years after AMG acquired its mothership, 40-year-old The Weather Channel.

All told, AMG’s 12 24-hour HD networks collectively serve more than 220 million subscribers across Comcast, Charter, Cox, Altice, DirecTV, ATT U-verse, Dish, Verizon, YouTube TV, and NCTC among others. Not bad, for a company that had only one distribution deal when Arouh joined the team back in 2010. “All of our Allen Media Group properties are growing at an unprecedented rate,” said Arouh.

The company’s growth has come in other ways, as well. AMG struck a deal with CBS in May that brought The Weather Channel content over to the venerable broadcast giant’s news programming. And some broadcast television station acquisitions toward the end of last year grew AMG’s broadcast television portfolio to 27 Big Four affiliate stations in 21 U.S. markets, covering about 5% of the country.

Meanwhile, the FAST channel HBCU Go focuses on coverage of the games, the bands and culture at historically Black colleges and universities. This fall’s football schedule includes 11 games starting Saturday, Sept. 10th. AMG inked comprehensive deals with the SWAC (Southwest Athletic Conference) and CIAA (Central Intercollegiate Athletic Conference) for coverage of college football games. It kicked off the pre-season on Sept. 3 from the Canton Football Hall of Fame.

Moving forward, AMG intends to brush against the Federal Communications Commission’s 39% market-share cap for broadcast TV stations. (At 5% coverage now, the watermark is not an issue for AMG at present.) The broadcast agenda has personal resonance for Allen. After serving as a teenage joke writer for the likes of Jimmie “JJ” Walker, he was the youngest comedian ever to perform on the “Tonight Show Starring Johnny Carson,” at age 18. Later, he joined the cast of NBC’s reality show “Real People.” During that time, he roamed America as a correspondent and met station general managers and group owners.

In addition to broadcast TV stations and cable networks, growth is expected to come in the streaming arena. Allen has prepared for that literally for decades. He bought up a lot of the “dot-tv” URLs about 20 years ago—long before streaming was cool—leading to the creation of several channels now in the AMG portfolio.

As he explained to Myers, URLs that ended with the suffix “.com” suggested that the content needed to be read. “That’s internet 1.0. But we, as human beings, watch more than we read,” Allen said. Convinced that the internet would become a popular way to watch videos, he secured “.tv” URLs that would be like “beachfront property.” And it’s paid off. For example, JusticeCentral.TV has 52 million subscribers; Comedy.TV and Recipe.TV will soon eclipse the 40 million threshold.

Sports.TV, an AVOD platform, now has a total of 100 channels, of which 67 FAST channels are devoted to various passion sports—ranging from beIN Sports Xtra to World Billiards to the Rugby Network to Ski TV. The Sports.TV platform also includes 40 other channels that largely fall into the news genre, according to Arouh.

That number of sports channels is just about higher than any other FAST channel in the U.S. It’s topped only by AMG’s streaming service Local Now in that ranking, according to the Variety Intelligence Platform Analysis.

Local Now had been part of The Weather Channel when Allen acquired it and includes 220 local daily news streams. Allen relates that when he acquired The Weather Channel, he was advised to just shut down Local Now. But instead, he invested $100 million in it and transformed the service from a subscription on demand platform into a free streaming service that includes more than 450 branded channels from the likes of Bloomberg, Kevin Hart, and People magazine. All told, it includes more than 14,000 TV shows, movies, and documentaries.

To fuel all that growth, AMG is now on a hiring spree. “We’ve staffed up our digital team. And we hired best-in-class and distinct staffs to produce The Weather Channel en Español, theGrio, and HBCU Go. Plus, we’ve been staffing up our ad sales team in a very big way,” said Arouh.

Advertising revenue is, of course, critical to all the expansion as well. And Allen is passionately determined to get a fair share of it for his company, and Black-owned media more generally. That’s a reason why he created the Black upfront marketplace last year, and why he sued the likes of McDonald’s to the tune of $10 billion in 2021.

Allen noted that 20-30% of the fast food company’s revenue comes out of the African American community. Christopher Kempczinski, President and CEO of McDonald’s, has a compensation of $10.8 million a year, Allen said. “That’s more than what McDonald’s spent on all the Black-owned media combined. So that’s why I sued them.”

And Allen said he has no compunction about suing other advertisers as well. As he explained to Myers, “I made it very clear to the ad industry, ‘You need to increase your allocations to us. You need to pay us a higher CPM rate than my White counterparts.’ And they said, ‘A higher CPM than your White counterparts?’ And I said, ‘Absolutely. For all the years you ignored [me].’” In his conversations with advertisers and agencies, Allen has said, “We as Black-owned media should be getting 14% or 15% of your budget, because that’s what we represent as people in this country. I’m not asking for that today, but we should be getting at least 5-10%.” Conversations like those have led Allen to refer to himself as “the Caucasian whisperer.”

Allen’s passion and (at times) rage extends to what other African American media companies and entrepreneurs have experienced as well. Take the Black News Channel, and why it went into bankruptcy, for example. He has termed the network’s inability to succeed an “epitome of corporate racism.”

In a sense, AMG was a little engine that could. But it actually has become a big engine that is doing ever more. As Dick Roberts, AMG’s Executive Vice President, Brand Marketing & Corporate Synergies, explained: “Byron has been strategic in acquiring companies, building new ones, and combining them to make a large and nimble company.”

Top members of his team like Roberts and Arouh have learned to be nimble, to keep up with the pace. “You have to be high on change to be successful in executing Byron’s vision,” Arouh said. “I’ve learned so much from him."